How she got the name, I’ll never know. She certainly didn’t earn it. “Moody” was remarkably even keeled. It had to be a joke, like in the movies where “Big Mike” is small, and “Tiny Joe” is actually a giant. Still, “Moody” was the name assigned my grandmother, and she wore it proudly. Sometimes she would use it when speaking to herself. One of her favorite phrases was, “Get up Moody!” She’d often say it after she’d had a brief rest. It was her “get back to work” phrase. Ironically, “Moody” was the hardest working person I knew. So, much like her nickname, I didn’t understand her use of that phrase either. She was familiar with grueling labor, and therefore well entitled to unbridled rest.  But with that one line command- “Get up Moody!” she’d reset her whole attitude. She'd plow through her tasks as though she was punched in on the time clock of God Himself. Indeed, she was. That is what I didn’t understand then. I understand it now. 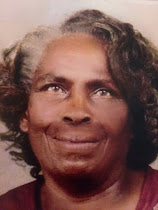 Time is among our most valuable resources. If we are not deliberate with how we spend it, we will waste it waiting to “feel like doing’’ something before taking action. It’s a trap. How often do we feel like doing hard things? Rarely, if ever. Plus, life gives us many reasons to sit down. Those lacking motivation, focus, or discipline will stay down. I am sure there were days my grandmother wanted to. Instead, after tending the fields, the livestock, and the land, she cared for children and grandchildren, fed neighbors, and assisted friends. She delivered babies, and acted as a mortician too.

"Moody" did what her spirit believed was good and right, even if her abled body protested. “Get up Moody” was an assault on the urge to remain at rest. It was my grandmother’s way of letting her body know, "My feelings don’t run me, my will does. I'm committed to what's best, not what's easy." She pushed beyond her body’s desire, and led her flesh. Her “little phrase” was her spirit speaking to a body that didn’t “feel like it.” A confrontation between desire and will. Moody wasn’t super human, she simply refused to be controlled by anyone or anything, even if that thing was a part of her. If rest wasn’t best, she didn’t take it. If work was difficult, she didn’t run away from it.

In all these negotiations she did not complain. She was calm. To lose control, or serve begrudgingly would’ve negated the victories she scored over her body. It would have given her flesh the final word. It would’ve had no impact on me.

The lesson I learned was huge. How we feel should not be the criteria for what we do. Something greater must determine that. Good. Need. Love. Truth-something absolute. To be led by feelings is to remain in perpetual infancy. No mastery. No maturity. That’s not a life well lived. That’s instability. That’s bondage to the emotions chosen by our body. Spiritual death.

Four decades later, this grandchild, and witness of radical self-discipline, finds herself borrowing from the wisdom and strength found in the order, “Get up Moody!” When I start thinking, “I’m just going to lay down, binge watch a show, surf  YouTube, or stay down a while;” I hear those words:

Get up is my encouragement to you. Resist “I don’t feel like it.” You have the power to do that. You don’t have to feel like it to do it. Do it because it is right, not convenient. True fulfillment does not live in your flesh or feelings. Your best intentions all exist in the spirit. They are manifested by the work of your hands, the work of body. It’s largely what separates humans from animals. In our spirit we can purpose to do good, and cause our bodies to follow. Life is disastrous the other way around. If the body rules, we’ll be inconsistent, and unfaithful. We’ll stay down. Defeated. The most effective use of the body is its obedience to the spirit, and a mind alive to truth.

I don’t know your mood, or your name, but as long as you’re alive, you have a chance. Things may not be easy, but hope lives. Good is possible. Easy is just a road to certain failure. Don’t chase it. Maybe you are tired, and you need a break. Rest, but don’t stay down. The same grandmother who said, “Get up…” and “Hard work won’t kill ya” also knew the importance of “sittin down” to rest and refresh. Work made rest necessary, and meaningful. Cherished moments.

Moody died at 97 years old.  She was right. It wasn’t due to hard work. She had a full life, and without the benefit of a formal education she left a mighty legacy.  She was a small woman, about 5’4 on tiptoes. But she was honorable and faithful, with a character that gave her the presence of a giant.  She was a fierce ally, and a truth teller to others, but most importantly to herself. Get up Moody! Was just one of many ways she did so. For the record her real name was Sarah Elizabeth Knowles. She lived the life of unbridled humility. She battled this world with uncommon kindness, and exceptional grace. It is my great honor to be the granddaughter of a warrior. 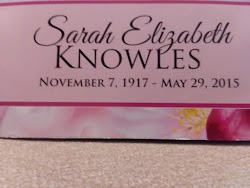 I suppose that after you written nearly a 15,000 word blog you are entitled to a month or two off. And so, I took a break. I didn't intend to. I intended to follow my post Unrest with one called "Black Enough." It would defend and detail all the reasons why I was qualified to speak so candidly on race. It would also serve to answer those who would seek to discredit me because I told the uncomfortable truth regarding the topic. I've decided against that at this time.

I realize that the reason I am qualified to speak on race has less to do with what I've suffered related to skin color, but on what I have endured related to the condition of my heart. I'm "black enough" to speak on racial issues because I once walked in total darkness in all areas of life. I've experienced that humans are selfishly motivated. Unless divinely influenced, man will never do right by man, and I am no exception.

It was the truth of God alone that changed me. It continues to this day. It is the reason I now seek to give the homeless new clothes, not just my old ones. It's the reason I give my family the choice cut of meat, and not save it for my plate. It's the reason I buy the thing that I damage at the store, and not have someone else eat the cost. It is the reason I return the item to the rack, or the cart to its place.  This list can go on, and though these are seemingly little things, they all esteem others greater than they esteem self. It is a life altering shift. I know who I was before. I'm different now. There is some new law written on my heart. Its primary function seems to be to inspire me to love and to do good works.

I'm aware that some will be turned off by the talk of Jesus. I truly never wanted to sound "too christiany." I'm not attempting to be pious, simply honest. I have struggled with just about every wrong thing I can think of. Even the "small things," whether it's lying, envy, gossiping, and on, none of those things promote the wellbeing or justice of another human. Only the love of God does that. I refuse to undermine the sacrifice and grace of Jesus by pretending that I could be enough.  It's futile to even entertain the idea. Justice and peace belongs to the Lord. Those who follow Him, find it.

And so as the unrest continues in the streets, and people urge me to fight against "social injustice," I choose to fight for something more. Love. I redirect my heart and focus towards the only God who gives joy in the midst of chaos. I follow the one who healed the outcasts. Fought for women's rights before the world knew it was the right thing to do. He associated with the racially marginalized, befriended and assisted the poor, weak an lowly. He chose inequality, and gave His life so that all may be free. His passion was not merely for "social justice," but spiritual justice. Spiritual justice is the true healer. It brings genuine power, and equality to all. His life forever taught us that man is more than his social assignment. Unless you address his heart, he will always descend into unjust behaviors and conditions. Social, and otherwise.

I find my comfort in Christ, not in my culture or my color. The issue isn't whether I'm "black enough" to speak on the one topic assigned to me by the world, but whether in freedom, I'm bold enough to speak the truth of God on any topic, to any power in this world. My credentials are greater than skin tone, or earthly affiliations. Simply put; I'm sinful enough to know, and speak on the transforming power of God's love. May He give me the strength to never shut up about it.

shan
I struggled with the decision to blog. But an avenue like this is an irresistible temptation to a would be writer. Eventually, we'll cave. With the decision to blog came the question, "What do I write about?" I'm not a "know it all." There are only two things I know well. I know love and I know truth. I've experienced both on the most powerful, and trivial of levels. No matter the message, rant, rave or review, it will be the truth motivated by love. I hope that hearing it in my voice adds something new to the conversation. That said, this is also a great way to journal my life. I stink at keeping journals of the book variety. I share life with a "no adjective to describe that level of amazing," sort of man. I get to call him husband. We are the parents of two daughters. I'll try not to write anything I don't want my girls to read. I want to truly reflect my God. He is the source of everything good in me. He's the ultimate example of, and has taught me all I know, about love, and truth. Thanks for stopping by. Hang out a while.